In 1993 “the Goose dropped a Golden Egg” in the BVI when it became against the rules to board more than 6 guests on a crewed charter yacht in neighboring US Virgin Islands. The crewed yacht industry supports a big diversity of companies like canvas workers and sail makers, provisioning, mechanics, divers, taxis and many more, estimated at 70 – 100 million per year.

As a result these new laws most of the yachts carrying more than 6 guests moved their head quarters to the BVI. With the restrictions of work permits, trade licenses etc. this was not easy, but there were not many choices. Most of the fleet had been based in the USVI, but the industry was basically served to the BVI on a silver platter.

Is the Fairy Tale becoming a “Ferry Tail”? 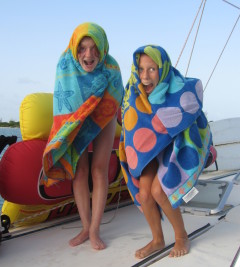 Since the BVI airport only caters to smaller planes, most people fly into St. Thomas and enjoy a beautiful one hour ferry ride to Tortola to start their charter. But that all went terrible wrong in the summer of 2013 when all ferries seemed to develop problems at the same time. Many groups missed their first day of charter, while forced to over-night in St. Thomas. That was bad. But hundreds of people missed their flights to go back home because there was no ferry. That wasn’t just bad, but also very expensive! And the ferries still are not dependable.

There are big plans for extending the airport in BVI, but if the ferries would run on schedule – or just run – this would not be necessary. Other islands like Anguilla and St. Barts do perfectly well with airports which are even smaller…..but the ferries work!

Taking all these things into account, we have it on authority, that “the Golden Goose” has been admitted to hospital for a hysterectomy. And here is why:

“The Coast Guard and Maritime Transportation Act of 2014 passed the U.S. House of Representatives on Tuesday April 1, 2014 with a provision allowing V.I. charter boats to carry more than six passengers, according to Delegate Donna M. Christensen and Gov. John deJongh Jr., who both praised the development. The bill still needs to pass the Senate and be signed into law.” – St. Thomas Source

It can be a bumpy ride from St. Thomas to Tortola on a small yacht and you can waste valuable time checking in and out. But many boats have moved their businesses back to the USVI and made it possible for you to start/finish your charter in St. Thomas as well … you will be sure to catch your flight back!